The first court-house was built by James Carrothers and his contract with the commissioners of the county made in 1816, was for one hundred dollars for all the wood-work. The stone and other work cost thirty-seven dollars. It was situated on the west side of the public square, in front of what is now Mr. Peter Diehl's store. Somewhat of a contrast between $137 and $40,000, the cost of our present courthouse.

Mr. Hunter, in the article before quoted from, describes the first court-house in this wise: "The lower story was a jail, and the upper story was the court-room. *** The first court held in it was in 1820. It stood in that place (in front of Deihl's store) for many years and was after words removed to the back of the present Court-house, where it was used for the jail only, for many years. Then, again it was removed to the farm belonging to the writer, [Mr. Hunter,] who now uses this ancient hall of justice as a stable." 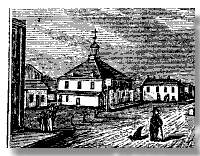 On the morning of the first of January 1840, the recorder's office, then in a private residence, was burned, and many of the records lost.

By the burning of the court-house in 1867, and the recorders office in 1840, the county suffered an almost irreparable loss, but from which it has measurably recovered. Some of the records cannot be replaced. Time alone, can remedy the misfortune. 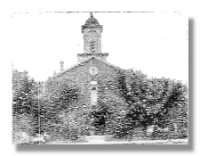 The third Courthouse: 1889-1905 (Burned Saturday, Febuary 25, 1905.)
In the years 1868-9, the present court-house was erected on the old site, which for its cost-about $40,000- is a credit to the county. While it as then thought to be a heavy burden on the tax-payers, it was paid for about as soon as it was finally completed. This court-house is 66 by 88 feet. The height to the square is 39 feet, and 90 feet to the top of the spire. The county offices are in the first story, and the court room in the second. The offices have all fire-proof vaults. 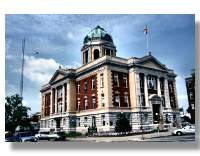 The present Monroe County Courthouse is of red brick with yellow brick quions, pillars and pediments, which are said to represent the colors of fall in the surrounding countryside. The main entrance is reached by a small flight of stairs between Ionic columns and a pediment of fine arched stone.

The halls of the second and third floors are finished in marble with oak walls and tile floors. There is a stained glass window on the north side stairwell reaching to the ceiling of the third floor rotunda. The basement floor is made of small pieces of marble embedded in cement. The courtroom is on the third floor and office of the local government are throughout the building.

designed by Samuel Hannaford & Sons and built in 1908 for $150,000, the building is still in use and today houses the Monroe County Court of Common Pleas and its probate and juvenile divisions.1

The courthouse has one of ten largest clocks in the world, which can be seen from miles away. Its four faces were installed in 1908 by Howard Clock Company of New York. The cost of the clock was $2,775. The clock originally had to be wound by hand with a heavy crank. In 1947, an electric motor was installed to replace the heavy weights.

This Courthouse is listed on the National Register of Historic Places.